A petition calling on Tesco to remove a controversial greeting card from its stores has gained nearly 400 signatures in just 24 hours. 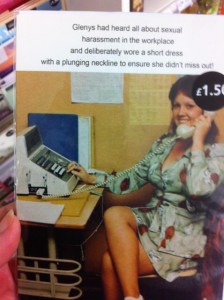 The petition, entitled ‘@UKTesco Remove this card’, was sparked following a series of tweets sent by students and customers outraged by a greeting card sold by the supermarket chain.

The card, which shows a female secretary at her desk, along with the caption “Glenys had heard all about sexual harassment in the workplace and deliberately wore a short dress with a plunging neckline to ensure she didn’t miss out”, “trivialises sexual harassment” according to Kent Labour Students.

Signatories on the online petition – which currently has 389 signed names – called the card “unacceptable” and “inappropriate”.


Julie Webster, from Hucknell, wrote: “It perpetuates the idea that women can be bought, that their bodies are somehow commodities.”


Nick Cooper, from Oxford, said: “Tesco should reflect on how this reflects on them as a company. Sexual harassment is a serious issue; can’t imagine they’d have a card making light on racial harassment, so why sexual?”

Meanwhile, Medwire readers have been sharing their views. Commenting on our Facebook page, ex-University of Kent student Holly Stewart said: “It’s making light of the sexual harassment thousands of women get each day at work? It’s saying to victims of sexual harassment that it is their fault which is obscene.”

However others have suggested the card is ‘humorous’.

Kent journalism student Sophie Wentworth said: “I really don’t see the problem with it, it’s obvious it’s not meant to offend anyone.”

Sarah-Jane Foreman added: “All its saying is as a woman, she would like some attention, and to be fair isn’t that what every girl does on a saturday night with the smallest dress and highest heels?


“I loved working in a male dominated environment and the boys “sexual harassment” was the funniest bit of the day… sure made working in a warehouse a little bit more enjoyable.”

Liam Powell said: “Not really funny, but you’d have to be pretty daft to get offended by it.”

The 44-year-old, who won the first series of The X Factor but was later dropped by his label, tweeted: “Ignore the students Tesco. Commies don’t want any fun. #Censorship””


He later added: “If Labour students had their way they would ban happiness and we would all have to wear grey and eat cardboard.”


The Medwire are still awaiting response from Tesco on the matter though a previous twitter response said that while “the subject matter is serious”, the “card is knowingly a joke that many find humorous.”

Kieran Watkins
Hey, I'm a 20-year-old Journalism student at the University of Kent, freelance writer for The Medwire and Travel Gay Europe and retail assistant/ traveller/ wannabe Strictly Come Dancing contestant. My passions include politics, business, entertainment, shopping, socialising, wine, books, travel, cooking and partying (lots of singing and dancing of course!) My party trick is Beyonce's Single Ladies, and my hero's include Sir Bruce Forsyth, Lord Sugar and Miss Piggy. I'm from Hampshire in the UK, but spend a lot of my time in Kent for uni and London for work/ socialising. Follow me on Twitter for more updates from my crazy-ish life: @kieranwatkins