Some have likened the structure to Stonehenge, while others have called it an eyesore. But the Medwire can exclusively reveal the facts behind the mysterious new stone structure outside the Gillingham building.

The new stone seating on the Medway campus was erected last Tuesday (May 14), much to the surprise of students and staff. 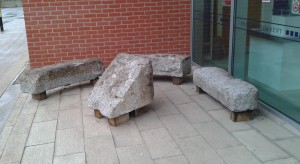 A Freedom of Information request sent by the Medwire to the University of Kent can reveal that the stones were found while development was taking place on the University of Kent’s Gillingham building.
The stones, which feature three stone benches and a centre piece – described by one student as a “concrete lump of cheese” – are made of granite, with the design and works instructed by the University’s Creative Campus Group.
Gary Cordes, the Information Compliance Officer for the University of Kent, said: “All the stones used in the scheme were originally found on the site during the development of the Gillingham building.
“The stones are provided as benches and their location was agreed by the Creative Campus Group.”
Responding to the Medwire’s request as to whether the stones were a memorial or symbol, Cordes stated that the “stones are not symbolic”.
Reactions from students and staff to the seats have been mixed.
Dave Woolley, University of Kent social sciences student, said: “It’s like parts of Stonehenge have been transported to Medway.”
A member of the Gillingham Building reception team said: “Since they’ve been put in [place] no one has sat on them.
“It would have been more practical to put in proper seats. It’s a bit odd.”
Although the stones were free, the exact cost the university has incurred by cleaning, mounting, and placing them by the building is unknown.
(Written by Kieran Watkins for the Medwire)
Posted by Kieran Watkins at 15:09

Kieran Watkins
Hey, I'm a 20-year-old Journalism student at the University of Kent, freelance writer for The Medwire and Travel Gay Europe and retail assistant/ traveller/ wannabe Strictly Come Dancing contestant. My passions include politics, business, entertainment, shopping, socialising, wine, books, travel, cooking and partying (lots of singing and dancing of course!) My party trick is Beyonce's Single Ladies, and my hero's include Sir Bruce Forsyth, Lord Sugar and Miss Piggy. I'm from Hampshire in the UK, but spend a lot of my time in Kent for uni and London for work/ socialising. Follow me on Twitter for more updates from my crazy-ish life: @kieranwatkins